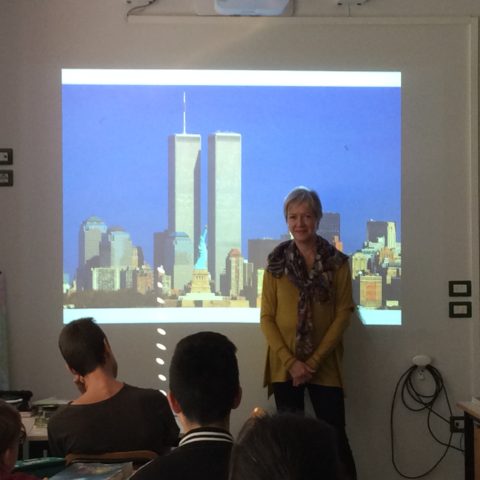 The students of the third grade met their mother-tongue English teacher, Nora King Lyons, some of them for the first time.  She gave a lesson about the catastrophe that happened in New York City on September 11th 2001 – the terrible disaster that occurred before any of them were born when the Twin Towers were destroyed by terrorists.

Through a PowerPoint presentation and video the students were shown actual pictures of the event that shocked the world.  Their reaction was at first silent then curious to ask questions about the disaster.   They talked about how the world has changed since that day.  Here are some of their impressions:

Daniele:  “I was impressed by the video showing the planes crashing into the Twin Towers.”

Giorgio:  “I was impressed by the photo of the rescue workers trying to rescue people under the rubble.”

Maddalena:  “I was shocked by the fact that almost 3,000 innocent people died for no reason.”

Another student, Zoe, said: “An American teacher told us about September 11th and she felt deeper emotions compared to us.”

And yet another student, Lorenzo, said: “They built fountains on the foundation of the Twin Towers to signify the rebirth of the country.”